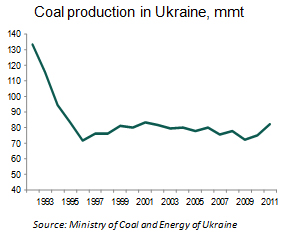 Ukraine has a favorable geographical location between Europe and Asia at the crossroads of major international trade routes and benefits from access to river and sea ports, developed railway and road networks.

Ukraine holds the 7th largest coal reserves in the world – 34 billion tones and 3rd largest anthracite coal reserves – 5.8 billion tones. Most of the country’s coal deposits are located in Donbas basin, Eastern Ukraine. In 2010, Ukraine was the 13th largest coal mining country in the world. Out of 82 mmt of coal mined in 2011, steam coal volume amounted to 62% of total output.
Majority of produced steam coal in Ukraine is consumed domestically for electricity production. Coal comprised 43.7% of fuel for energy generating companies in 2011, which makes it second most important fuel after nuclear. 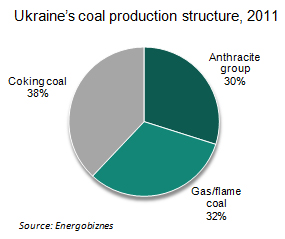 Increased demand for steam coal is supported by underutilized capacity of coal-burning TPPs, implementation of pulverized coal injection (PCI) technology at metallurgical plants and increasing export volumes. However, currently Ukraine has a surplus of anthracitic coal, which is mainly exported to Turkey, Bulgaria and Western Europe countries.

Coal production in Ukraine halved over the last 20 years on the back of low demand in the mid-1990s and on a lack of investments into sector’s development. Ukraine has a chance to restore former potential implementing successful reforms.

Over the last 2 years, coal production increased by 14% – from 72 mmt in 2009 to 82 mmt in 2011 mainly on increased production from private mines. Further increase in mining output is expected after the privatization and modernization of nearly 100 state mines.